THE CLEAN UP OF SCRIPTURE 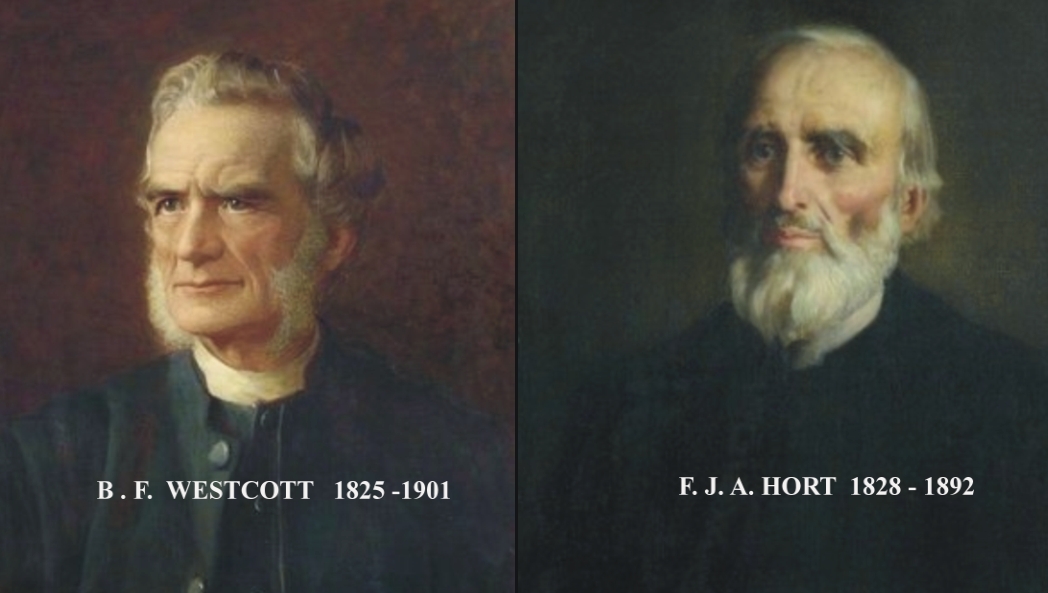 In 1881 the bible scholars Westcott and Hort made a most notable undertaking in cleaning scripture. By using the masses of manuscripts that had been raked out and made available they devised a system to evaluate the age and strength of these manuscripts. Putting it as simply as possible, what they did was to apply a two-level refining procedure.


The first involved evaluating the internal evidence of any conflicting variations they found in these manuscripts. Initially they evaluated the probability of the original author's meaning by applying the evidence of  internal harmony of context (considering the author would not generally contradict himself). Then they evaluated the position and motivation of the copy scribe who through personal belief, bias, indoctrination or external pressures from commissioners may have distort the text.


The second refining process they then applied was to sort all available manuscripts into families. Each manuscript identified as belonging to a particular group because of its characteristics. They divide them into four family groups.

The further back in time one goes in any of these family trees the less material there is. To build up a complete text using the oldest available bits a combing process was applied to fill in what was missing. Starting with the oldest material and then combing forwards through each family tree, where a piece of missing text was found not carried by earlier ones it was added and so on through the text until all the earliest available material was incorporated as far as possible into a complete composite text. This resulted in a compilation text where each part was weighted in favour of the oldest least corrupt available piece of any given text.


A Greek translation was compiled directly from this major ancestral composite manuscript. It is not difficult to see how this resulted in a much cleaner and accurate translation. Once this new cleaned translation was compared to the Textus Receptus of the King James Bible it could be seen how extensively the text had deviated from the original. It is no wonder most scholars abandoned it. The Westcott and Hort Greek translation was by far the cleanest of translations achieved of the new testament  by the end of the 19th century.


Since Westcott and Hort's monumental cleaning work of the Greek scriptures in 1890 numerous other even earlier manuscript evidence has come to light over the last 130 years. The entire critical process should be redone taking this more recent recovered evidence into account. But where is the present day independent "Westcott and Hort" who could take on this undertaking? The need for independence from any manipulation by Church influence and control would be essential. No matter how good the source material, the 'weighting' aspect in the procedure can be very much open to scholarly interpretation which can easily be influenced by the pre-indoctrinated mind or pressure from commissioner's cheque. This is as true now as ever, an examination into the background, prejudices and allegiances they are affiliated to, and where the financial backing comes from does not go amiss.


Since the Westcott and Hort text the next events have been more a case of one step forward two steps back. In 1900 Bernard Weiss translated a Greek text by applying his own theological views to it. He selected from the variant texts available what he believed to be the most appropriate according to his theological views. Presumably he considered his views to be pure truth no doubt in line with the religion he belonged to along with the creed doctrines.


In 1901 Eberhard Nestle produced a version of the Greek text based on the comparison of three earlier texts, Tischendorf, Westcott and Hort and the Weiss text. He simply took the consensus of these three and made this his text. This resulted in the cleanest most accurate of these three texts, the Westcott and Hort, being contaminated by the inferior Tishendorf text and the personal theological weighted text of Weiss, definitely a couple of steps backward.

Developments have been made using this hybrid Nestle text which introduced numerous newly discovered papyri manuscripts or manuscript minuscules (bits of a manuscript) some dating back to about 200 AD only 100 to 150 years after the originals were penned. All well and good, but along with this the Nestle text has been re-evaluated with the evidence of the writings of numerous so called 'Church fathers'. No prize for guessing which Church denominations were involved here. These 'Church father' writings covered a period between 200 and 700 AD. During this period, the great apostasy the apostles warned about was in full flow incorporating the pagan creed doctrines which by the end of the second century had completely taken over, see Truth dies with the Apostles  and  Apostasy developed by creed doctrines.

With the restraining of the apostles gone it is a great mistake to apply weight to these 'Church fathers' most of who were likely involved in the apostasy and corrupting of the apostles teachings. Many directly involved in the creation of these pagan religious  creed doctrines. Far from having a cleaning effect on the Bible text the very opposite would be the case. The cleanest translation to date, the Westcott and Hort text, was re mixed with inferior translations and then under Church control mixed again with the pagan ideas of  'Church fathers' undoing all the good of the Westcott and Hort text. Thankfully we can still refer to this Westcott and Hort text directly without any of these re worked corruptions.


The Greek Scriptures are again in need of re-evaluating with a fresh start, incorporating all new available manuscript evidence found to date since the time of Westcott and Horts, again applying genealogical and statistical criticism, internal writers context and copyists probability weighting. Definitely without any reference to 'Church father' thinking applied. Ideally the conductors of this project should be from a  totally neutral theological background with resources and funding from non-dogmatist sources. Are we asking too much? Sadly maybe.


Needless to say church institutions have welcomed this exposure of their old received Bible translations like they would a hole in the head. They have generally carried on as if nothing had happened using the same old corrupt Bibles making token appearance of acquiring more modern translations while keeping as close to the old versions as possible. New translations will not necessarily be better, the source of material and translators methods should always by evaluated.


For those more discerning studiers of the Greek scriptures it is now possible to seek out 'cleaner' translations. Bearing in mind all Bibles are but versions of the original. Each affected by the source material translated, the translators are influenced by their own personal views and beliefs when selecting from a range of various words and definitions to translate the original meaning into the modern language. In order to gain the original authors thought as accurately as possible, multiple Bible translation comparison is essential. Using interlinear versions we can refer to the Greek word and its various renderings when translated into the common language this can help clarify the original meaning.


A web search of modern new testament Bible translations based on the Westcott and Hort Greek is a good starting point for identifying cleaner Bibles, on line bible comparison sites are good for comparing these translations when studying particular verses. With these tools the bible opens up far greater wonders than have previously been appreciated. Breaking news on God's Kingdom timetable has now come to light see:

The Kingdom timetable brings opportunities for Christians from all denominations