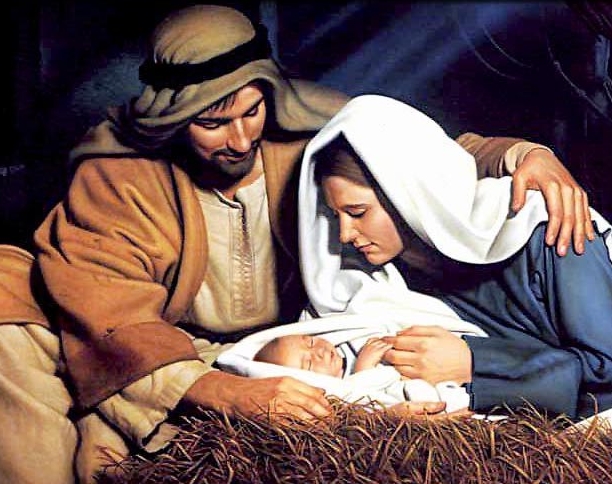 WHEN WAS JESUS BORN?


References to King Herod in connection with the birth of Jesus are found in chapter two of Matthew. He was King of Judea when Jesus was born and tried to kill him soon after his birth. When Herod died soon after Jesus' family went on the run from him to Egypt, he was succeeded by his son Archelaus as king of Judea. Because Joseph was in fear of him also the fugitive family ended up in Mary's home town of Nazareth Galilee, steering clear of Joseph's ancestral town of Bethlehem in Judea.


Ambiguity over the date of the death of King Herod has apparently resulted in some major errors being made in dating the birth of Jesus, in spite of the mass of sound dating evidence available. Let's have a closer look at this evidence. Josephus, the major historian on this subject, provides us with the following pieces of information in his Antiquities of the Jews volumes 14,15 and 17.


4. Herod dies 34 years after he captured Jerusalem in 36 (Vol 17, VIII:1). So he dies between April 2 BC and April 1BC
using the April to April dating system for counting the reigning years of  kings.

If Jesus was born in October of the year 2 BC and Herod died in January of the year 1 BC, do all Bible details and events that are recorded fit into place during this period? Let us examine them, many people believe the Bible account tells of three kings arriving on the night of Jesus' birth at a stable led by a star which directed them there. Those familiar with the Bible accounts will tell you this is not so, the events were much different. King Herod first gets involved with the birth of Jesus when these pagan astrologers arrive in Jerusalem making inquiries as to where they might find a new born Jewish King. Nowhere does the Bible say there were three Magi, only "Wise men" in the plural, any number more than one, there could have been a small group of them.


They had travelled from the East according to Matthew 2:1, that must mean east of Jerusalem probably the Babylon area. Star worship was prevalent in this part of the world by these ancient nations. In fact 'Yhwh' strictly outlawed any involvement with stargazing or astrology. It was a type of divination worship used by those endeavouring to gain knowledge of the unknown (Deu 18:10-12). In view of their religious practices, these 'Wise men' were very unlikely to have been worshippers of Yhwh but very likely to have been worshippers of another god who the Bible describes as a 'star' at Isaiah 14:12.


These 'Merlin' type learned men referred to as Magi, were educated in the arts of the occult, divinations and astrology. So who was behind this 'star' and for what reason? According to the account in Matthew chapter two, it was to draw attention at this critical time to the birth. The birth of a potential mortal enemy of Herod.  This advertising of the event was intended to highlight the birth connived by the enemy of the Messiah, the leader of rebellion (2 Thes 2:9). These star-signs were given to dedicated occult worshippers. This 'star' was designed to alert Herod to the birth of an opposition king.


Turning to the scriptural account what do we find? At Matthew 2:1-2 a "star is seen in the east" an astrological divination star-sign probably first seen in Babylon. According to the stargazers, this was a sign of a king to be born to the Jews. Note the account does not say the star guided them to Jerusalem it only alerted them in Babylon. Logically, for these Magi to find out more about this sign and of a possible new-born king of the Jews the place to go was Jerusalem, which they duly did, a journey of some 500 odd miles, two weeks travelling by camel.


When arriving at Jerusalem they start inquiring about the birth of a king, most probably in the temple courtyards where most activities were carried on. Their inquiries had the effect of causing a great deal of speculation and agitation among the Jewish attendants, upsetting many of the people so much that verse three says 'all Jerusalem became troubled'. The news of this eventually reaches the sick 70 year old Herod, he is very upset by the possibility of the birth of a new anonymous king. Being old and sick he would soon die and his sons would inherit his kingdom, he does not want any new pretender king robbing him and his heirs of their inheritance. This greatly 'troubles him,' the 'star' through the Magi had rung the intended alarm bells in his head.


Herod tries to find out who and where this king is to be born so that he can sort out his problem and remove the possible usurper. He calls the chief priests and scribes and demands to know where and who this possible usurper is. This forces them to study the scriptures for the answers. They find the prophecy of Micah 5:2 referring to Bethlehem as a possible birth place of a king. Herod secretly summons the Magi and asks them when they saw this 'star'. Unfortunately we have no record of their reply, which would have been interesting (Matthew 2:7).

It is Herod that has to tell the Magi where to go to search for the child, in Bethlehem, as now there was no star to follow, it having disappeared. Herod wants information on where the child is. Why? So he can pay his respects? No! So he can destroy him! The Magi now with their travelling directions from Herod set off for Bethlehem. The 'star' which they had only seen in the east now miraculously reappears! Apparently the pagan Magi are the only ones who can see this star. Its reappearance makes them very happy (Matthew 2:9-11). The record states the star stops over a 'house' not a stable. When the Magi arrive they go into this house which by now is some weeks after the birth based on the Bible events.

b) Jesus is circumcised at the temple 8 days after his birth on the 13th of October 2 BC.
The family remain in Bethlehem (Luke 2:21).

d) Magi arrive and present gifts in the House! At the earliest this would be some six weeks after their
first seeing the star in Babylon and the time of the birth.

e) Probably on  that same  day,  as Bethlehem is only  5.5 miles, a  two hour walk  from Jerusalem and
Herod was  anxiously waiting their return. The Magi are warned off in a dream not to report back to
Herod as they had agreed.


f) Likely that same day an angel warns Joseph to flee to Egypt to avoid Herod and Satan's manoeuvrings
to destroy the child. Being only an 11 mile round trip from Jerusalem to Bethlehem, Herod would have
expected the Magi to  be returning within  24 hours and  smelt a rat when they were late, triggering his
reaction in dispatching troops to destroy all the boy infants. Although he specifies all two years and
under to be killed, there probably were not that many boy babies 2 and under in the small town of
Bethlehem. All the Passover and census visitors would have been long gone. Possibly a handful were
killed, even hardened troops are not too keen on this type of work.


g) The same day, Joseph starts the family's 300 mile flee down to Egypt. It would take about two weeks
to arrive in Egypt around the end of November 2 BC. The family remains in Egypt until Herod dies on
the 18th of January 1 BC and the angel tells them to return to Israel but they do not return to Judea for
fear of Herod's son Archelaus now the king, instead they go discreetly to Galilee.
(Matthew 2:15,19,21-23).


If, as the chronological events support, the flight to Egypt occurred within hours of the Magi failing to return to Jerusalem, then Jesus must have been at least 40 days old as Mary had already undergone the purification ceremony at the temple; she could hardly have done this in Egypt. All these events fit within the time table for a birth of the Messiah in October 2 BC, and the death of Herod in January 1 BC.

Thirty years later, on the 5th of October 29 Jesus starts his ministry and 3 1/2 years after this in early April 33 comes his all important death date.This death date sets the start of a new 2,000 year Kingdom covenant soon to be completed it brings good news of some fantastic possibilities, see: KINGDOM OPPORTUNITIES FOR CHRISTIANS OF ALL DENOMINATIONS