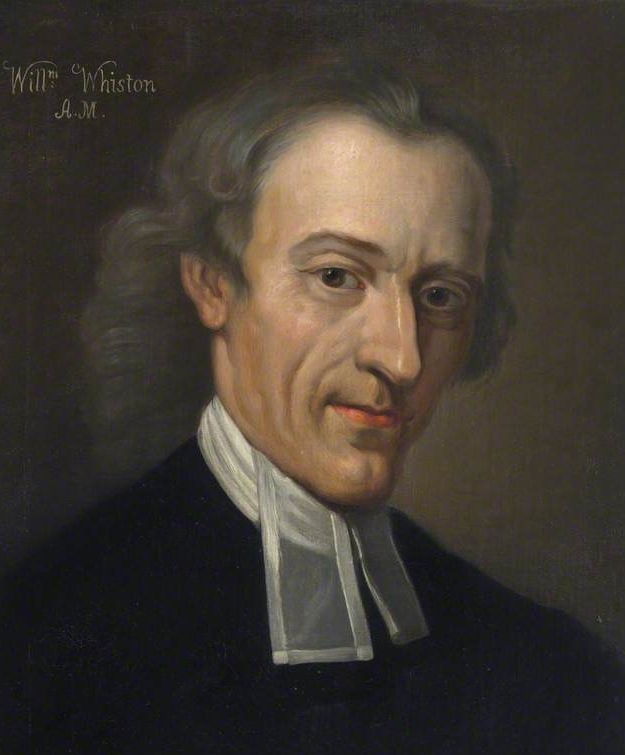 
Was an associate lecturer in mathematics and astronomy at Cambridge University and fearless in speaking out against the established Church and in particular, the doctrine of the Trinity.  He translated from Greek into English the historical writings of Flavous Josephus, the eye witness historian of the events at Jerusalem between 66 and 73.  Whiston also wrote four volumes on 'Primitive Christianity Revived' and worked on developing a maritime chronometer.

William Whiston, mathematician and theologian, received a B.A. from Cambridge in 1667 and was appointed to Isaac Newton's professorship in 1701, succeeding Newton at Cambridge in 1703.  His lectures on mathematics and natural philosophy, together with his scientific experiments, led him to be the first to popularise the theories of Newton.  Whiston, unlike Newton, was courageous in publicly voicing his beliefs, which he would suffer for.  Fearlessly, he spoke out against the established Church and started writing on the millenarianism, (the 1,000 year rule of Christ) integral to the Newtonian theology.  He also wrote on prophecy, publishing an essay on the Bible Revelation book of John in 1706.  In this work, he proclaimed the millennium to start in the year 1716.


Whiston rejected the trinity statement of the Nicene Creed; his study of the Apostolic Constitutions (the original Apostles activities and beliefs) convinced him that Arianism (God was the creator and Father, Jesus was a first created son of God and the Holy spirit was God's dynamic force) was the belief of the early church.  In 1710, charges were brought against Whiston for promoting doctrines opposing the Church of England.  He was found guilty and stripped of his Cambridge professorship and expelled from the university.

In 1714, Whiston became instrumental in the establishment of the Board of Longitude and for the next forty years, made persevering efforts to solve the longitude problem.  He produced one of the first isoclinic maps of southern England in 1719 (lines on a map connecting points of equal gradient).  In about 1747, Whiston finally left the Anglican communion for the Baptists.  He quit the church literally as well as figuratively, as the clergymen began to read the Athanasian (trinity) Creed.

He modified the biblical Ussher chronology, setting the creation of Adam at 4010BC and challenged Newton's Biblical chronological system.  Whiston's later life was spent in incessant controversy, theological, mathematical, chronological and miscellaneous.  Fearlessly, Whiston formed an opinion and then published it almost simultaneously.  He took much of Isaac Newton's research in clarifying bible understanding and added to it.  But unlike Newton, he had the courage to speak out and publish.  Both Newton and Whiston had good analytical minds, breaking down the repetitious chanting of the church's pagan creed doctrines.  A further forward mover in scriptural understanding was the man John Darby.

Much continued refining has been done since William Whiston's efforts in recovering clearer understanding of God's word.  These advancements have provided greater clarity and understanding on God's Kingdom and its time table.  For further information on this go to:- NEW KINGDOM OPPORTUNITIES FOR CHRISTIANS OF ALL DENOMINATIONS.