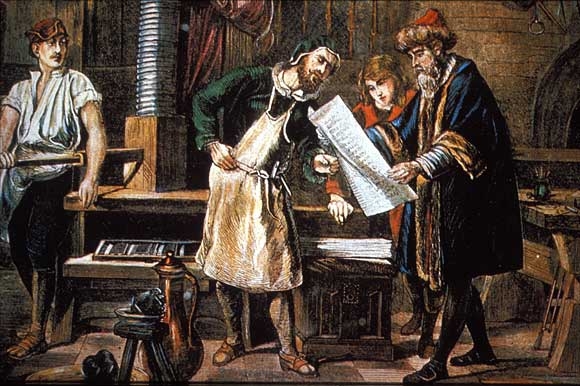 
After 1455, the printing press weakened the Churches' censorship control of scripture, making mass copies available at a vastly cheaper price than that charged for a scribe's hand written copy.  Although at that time, the copied material was poor and full of errors, these early printed Bibles were clean enough to see the glaringly obvious discrepancies of Church teachings.

This inevitably brought protests against the established powerful Church, giving birth to the Protestant Reformation.  It was the so-called 'first awakening' or, more accurately, the first stage in a retrieval process of buried scriptural knowledge.  Unfortunately, because the Textus Receptus translation was used for these printed copies, they contained over 2,000 errors.  The protests were mainly, against practices of the Church, although seemingly very important at the time.


So powerful and corrupt had the old church system become over the previous 1,500 years, that even protests exposing obvious malpractices brought instant reprisals.  Some individuals armed only with their blurred copies of the Bible, became so affronted by obvious wrongs practised of the church, that they separated themselves, forming breakaway church religions.  Among these separatists were Moravians, Lutherans, Anabaptists, Calvinists, Presbyterians, Mennonites, Pilgrims, Puritans, Baptists, Methodists and Quakers.  I leave out the Church of England's protest and separation, as Anglicanism had little to do with Bible protests and all to do with a king's desire to pick and choose wives and grab back wealth and property from the monasteries of the Roman Catholic Church.

While the Church ruled supreme through its appointed vassal national kings, the powerful clergy had become corrupt in nearly every way imaginable.  They 'conned' their congregations into believing that nobody could even get near God and salvation, without buying it through the Catholic Church system in one form or another.  To this end, they readily sold indulgences to their congregational prey. An indulgence is "a way to reduce the amount of punishment one has to undergo for sins".  It may reduce the "temporal punishment for sin" after death, in the state or process of purification called purgatory. Wikipedia

Failure to do it their way and pay for it, according to them, meant damnation, torture in the 'after-life' and sometimes, a quick exit from this one.  Just how great a change did these Protestant reformers make in understanding and applying more accurate Bible information?  Not as much as some would have us think! Major changes to the old creed doctrines would have to wait for a future generation.


Although the doctrinal changes made by these Protestants were small, it still took great courage for the average man to reject the old Church system and its imposed machinery for salvation.  Standing up against its power to administer life and death, often by the human hand, needed a courageous heart. Any act or belief contrary to the authorised teachings of the Church was labelled heretic and, as often as not, carried a death penalty.


The Catholic Douay and the King James Bible were blurred and ambiguous, hence of limited help to these individuals.  They were endeavouring to look for accuracy in the Scriptures through a dirty window, although a dirty window was better than no window.  Nevertheless, from 1500 on, they were able to discern from their printed Bible copies some of the more obvious truths and, predictably, protested for changes.


1. Salvation by faith, not by the mechanical system of the Church, by the sale of indulgences.


2. Baptism was for adults, not infants, Churches taught eternal death for any child who had not undergone baptism.

3. Jesus Christ is head of the Church not the Pope. God's church is not made of man made buildings.

4. All men are equal in God's sight, some not more equal; church elevated kings or clergy to higher positions.

5. God's revelation is by the Scriptures, not an infallible Pope or clergy class who buried Scriptural information.

6. Protests came against the Church's use of images in worship, including kissing of rings, crucifixes and statues.

7. Some rejected the Church's laws on fasting, tithing, penitence, confession and absolution.

8. Others objected to the Church using clergy titles such as Father and forbidding clergy to marry as unscriptural.

To an intelligent student of the Bible today, these are all seemingly elementary and obvious points, but they were new and revolutionary after a 1,000 years of being kept in the dark.  Many ideas were advocated; changes were made only to be changed back again under pressure from the church.  Often, the persecuted became the persecutors.   The melting pot of protest was bubbling vigorously, although with limited ingredients.  It would take special thinkers and students of the bible to make any greater progress;  one such thinker was Isaac Newton.

The process in retrieval of accurate scriptural knowledge has continued to this day, see The clean up of scripture.

Cleaner and more accurate scripture translation has revealed amazing aspects of God's Kingdom and its timetable previously lost,  see   Kingdom opportunities for Christians of all denominations.